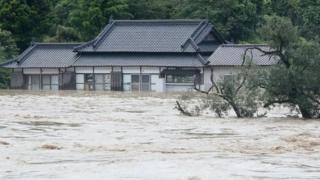 The Kuma river bursts its banks in Yatsushiro in Kumamoto prefecture

At least 14 people are feared dead at a nursing home on Japan’s southern island of Kyushu as unprecedented rainfall caused landslides and massive floods.

Tens of thousands of people have been told to evacuate homes. The Kuma river in Kumamoto prefecture burst its banks.

PM Shinzo Abe ordered 10,000 troops to be deployed, after rescue services were overwhelmed with calls for help.

Mr Abe said heavy rain was predicted to continue until Sunday and urged people to be on “maximum alert”.

The prefectures of Kumamoto and Kagoshima have been worst hit by the rainfall.

Kumamoto’s governor, Ikuo Kabashima, told reporters the victims at the nursing home were found “in cardio-respiratory arrest” a term used in Japan before a doctor officially certifies death.

Another two people were feared to have been killed in a landslide in the town of Tsunagi, although this also is not officially confirmed.

Mr Abe said “there is information of people who may have fallen victim to landslides”.

Other people are believed missing but there are no official figures.

Footage shows a bridge over the Kuma river washed away, with other pictures of submerged cars and houses.

Japan’s Meteorological Agency said such rainfall had never been seen before in the region.

Haruka Yamada, who lives in Ashikita in Kumamoto prefecture, told Kyodo: “I saw large trees and parts of houses being washed away and heard them crashing into something. The air is filled with the smell of leaking gas and sewage.”

The NHK broadcaster says there are reports eight homes in the town’s Takinoue district were washed away.