On Monday, MPs on the Health Select Committee rapped the government on the knuckles for failing to stop supermarkets offering “deep discounts” on unhealthy food. It turns out that an astonishing 40% of the food UK consumers buy is on special offer, and too much of it is unhealthy.

Even when it’s about reversing the epidemic of childhood obesity, and even when the retail industry itself is calling for regulation to create a new level playing field, the government is reluctant to intervene. It’s locked into its own neoliberal box, fearful of being branded a “nanny state”.

Meanwhile the Department for Environment, Food and Rural Affairs’ (DEFRA) long-awaited 25-year plan for Food and Farming seems to have gone AWOL. Having seen an earlier draft, my advice is don’t hold your breath.

It saw future UK challenges as resolvable by agri-tech innovation and more food exports. That’s an absurdly narrow view of what the UK’s food problems are today let alone lie ahead. 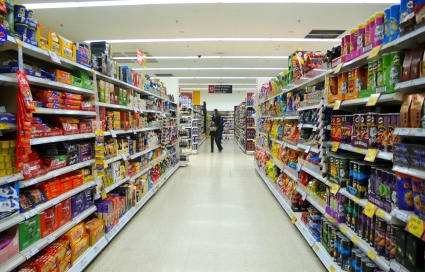 We must move away from a culture of too much choice, by Yuichi Shiraishi

Among the herd of elephants in the food policy room is how and what we eat. The pattern of food consumption unleashed in the late 20th century now needs to change.

This cannot simply be done by changing production, important though that is.

This is about culture. What and how people eat shapes the commodification of food supplies. The pursuit of ever-cheaper food drives ecosystems’ damage and actively encourages consumers to over eat.

Sustainable diets must be low carbon, nutritious and affordable

Seventy years ago, from the ashes of the Second World War, it made sense to adopt a productionist food policy. More food fed more mouths, and brought prices down.

But today, the health problems are a diabolic mix of over-, mal- and under-consumption, with powerful off-land forces driving tastes and reshaping food culture.

Talk of ‘consumer sovereignty’ is nonsense. It took 20 years to get quantity-based ingredients labelling in the EU, such was the resistance.

And as Pamela Mason and I show in our new book Sustainable Diets, published this week (Routledge, March 2017), a good diet is not simply a cheap one, nor even a plentiful or healthy one.

Sustainable diets have multiple rather than single criteria; they need to be low carbon, low in embedded water, biodiversity protecting, nutritious, safe, available and affordable to all; they must also be high quality and culturally appropriate and derived from labour processes that are just and fairly rewarded without dumping external costs elsewhere in the economy.

This is a more complex message than the simplistic mantra – chanted by a new generation of productionists – to produce more food.

As I have detailed in a new paper for Friends of the Earth’s Big Ideas project, attempts to get new official sustainable dietary guidelines have met fierce resistance, particularly from the meat and dairy sectors, globally.

In the UK, as we totter on the edge of leaving the EU, we must remember the advice spawned by the Defra Green Food Project (Principles for Healthy and Sustainable Eating Patterns) were spelled out by an expert committee only to be shelved. So much for evidence-based policy!

It is scandalous how politicians and food industries seem reluctant to help consumers about the need to change. To be fair, they’re right to sense how radical a departure a new goal of sustainable diets would be. But the prize is immense.

Lower NHS bills, food security for future generations, better land use, a re-engagement of urban mass with beleaguered rural workforce (which is about to lose its EU subsidies from Brexit), better food, more horticulture, more marginal land for re-wilding.

At heart, the resistance to Sustainable Dietary Guidelines is simply ideology, a default belief that whatever consumers want must be right, when politics ought to be about helping the population to consume wisely.

The brilliant campaigning by Action on Sugar has shown a lead: who would have thought there’d be support for a sugar tax? Not that taxation is the answer to unsustainable diets, any more than “choice-editing” by the food industry below the consumer radar is.

“Fair-traded” sugar is still sugar. The challenge is to develop land use for good food to meet ecological public health.

The great news is that all over the world, a wave of democratic experimentation is emerging. When central states are reluctant to do the right thing, bowing to powerful long-term lobbies, it’s so heartening to see local and city projects beginning to face the sustainable diet challenge.

Here in the UK, new alliances such as Eating Better are lobbying, organising, and building recognition. The Sustainable Food Cities movement is spreading around the world. In late 2015 I witnessed 100 Mayors of major cities around the world sign the Milan Urban Food Policy Pact, committing to do their bit for sustainable diets.

Bristol became Britain’s first Flexitarian City, championing healthy and sustainable diets, working with restaurants and local businesses to extend and publicise less and better meat choices in diet, such as through their flexitarian restaurant awards.

In Brazil, the Ministry of Health revised its dietary guidelines to include environmental impacts and launched them with a call for cultural change, and daringly urged consumers to avoid foods if they were heavily advertised.

But the space to take such a lead was carved out over decades in the working class movement. It took political leadership to turn Belo Horizonte (Brazil’s third largest city) into a “city that ended hunger”.

As we in Britain are reminded how our food system relies on migrant labour (with Uber, Deliveroo and Amazon perhaps set to casualise it further), we do well to learn how long-term patient work in Belo Horizonte made providing “food with dignity” a key goal.

The UK meanwhile has normalised food banks as a charitable response to food inequalities. Shame on us. It’s in danger of using the poor for waste disposal.

Sustainable Diets is a Big Idea for 21st century food systems. It brings us all together, whatever our starting point of concern.

Get engaged, not simply as a consumer, but as an active citizen.

Get active in local initiatives, but don’t let the government or food industry off the hook.

Tim Lang is Professor of Food Policy at City, University of London

Order the book: Sustainable Diets: How Ecological Nutrition Can Transform Consumption and the Food System