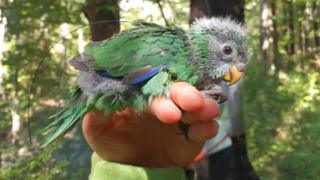 One of the rarest birds in New Zealand has had its best breeding season in decades, raising hopes for the species.

At least 150 orange-fronted parakeets, known locally as kakariki karaka, were born in the wild this season.

This could potentially be a doubling of the current parakeet population, estimated at only 100 to 300 individual birds, according to the Department of Conservation (DOC).

The DOC found 31 orange-fronted parakeet nests in the city of Canterbury on South Island this year – more than three times the number of nests in recent years.

It put the success down to an abundance of beech seeds, which “dominated” the birds’ diet this year.

The department said it would focus on protecting the orange-fronted parakeet from rats, stoats and feral cats – whose populations are also expected to have benefited from the abundance of beech seeds.