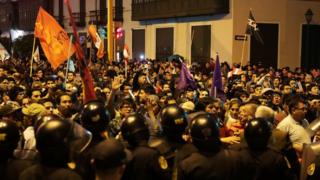 But officials said their move was void, as the chamber had already been closed.

Hundreds of Mr Vizcarra’s supporters gathered outside the Congress building in the capital, Lima, to cheer the decision, while riot police stood by.

The chaotic scenes came as Peru was still reeling from the fallout of a massive corruption scandal involving the Brazilian construction firm Odebrecht.

“Peruvian people, we have done all we could,” Mr Vizcarra said in a televised statement, announcing that he had invoked a constitutional article allowing presidents to dissolve Congress.

The drastic move, he said, was necessary in order to hold new legislative elections after parliamentarians failed to pass his reforms and, last week, refused a bill to hold a snap election.

But opposition legislators responded by calling him a “dictator” and voted to declare him temporarily suspended, naming Vice President Mercedes Araoz as a replacement.

Mr Vizcarra was sworn in last year after his predecessor, Pedro Pablo Kuczynski, resigned over allegations of corruption.

Peru’s three other most recent presidents were involved in the Odebrecht scandal – which saw executives from the construction firm confess to having paid bribes to politicians in exchange for contracts in various parts of the world.