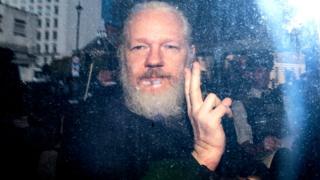 Swedish prosecutors are set to announce whether they are reopening an inquiry into a rape allegation against Wikileaks co-founder Julian Assange.

The investigation may be revived at the request of the alleged victim’s lawyer.

Assange, who denies the charges, has avoided extradition to Sweden for seven years after seeking refuge at the Ecuadorean embassy in London in 2012.

But the 47-year-old was evicted last month and sentenced to 50 weeks in jail for breaching his bail conditions.

The US also wants to extradite Assange from the UK over his alleged role in the release of classified military and diplomatic material in 2010.

On Monday, Sweden’s deputy director of public prosecutions, Eva-Marie Persson, will announce her decision on whether to revisit the sexual assault investigation after it was dropped two years ago.

Swedish prosecutors said at the time they felt they were unable to take the case forward while Assange was inside the Ecuadorean embassy.

However, the woman who made the allegation now wants the case reopened, and since Assange’s arrest last month – Ecuador abruptly withdrew its protection and invited the police to arrest him – Swedish prosecutors have been considering their options.

Under Swedish law, they have until next year to pursue the case. If they do re-open the investigation, it is likely to raise the question of which extradition request should take precedence: that of Sweden or the US.

Australian-born Assange faces a charge of conspiracy to commit computer intrusion in the US. He is accused of participating in one of the largest ever leaks of government secrets, which could result in a prison term of up to five years.

After his dramatic arrest last month, he was taken to Westminster Magistrates’ Court and found guilty of a British charge of breaching bail. He is currently being held at Belmarsh prison in London.

The United Nations has called for his right to a fair trial to be respected during any extradition process.

What is the Swedish investigation about?

Assange was accused of rape and other sexual offences against two women following a Wikileaks conference in Stockholm in 2010. He has always denied the allegations, saying the sex was consensual.

He also faced investigations for molestation and unlawful coercion, but these cases were dropped in 2015 because time had run out.

Prosecutors have been re-examining the rape case to decide whether to resume it before the statute of limitations expires in August 2020.

The alleged victim’s lawyer, Elizabeth Massi Fritz, said Assange’s arrest came as a shock but “what we have been waiting and hoping for since 2012 has now finally happened”.

She said: “No rape victim should have to wait nine years to see justice be served.”

How does the extradition process work?

Lawyer Rebecca Niblock said the extradition decision lies primarily with the courts and that only a judge can decide whether an extradition breaches an individual’s human rights.

The home secretary can consider a limited number of issues when deciding whether or not to order an extradition, including whether the person is at risk of the death penalty.

However, if Sweden made an extradition request, Ms Niblock said it would be for the home secretary to decide which request would take precedence, considering factors such as the seriousness of the offence and which request was made first.

Nick Vamos, former head of extradition at the Crown Prosecution Service, said the UK proceedings should not take more than 18 months.

Considering Assange’s potential objections to extradition, Mr Vamos said that he did not think courts would accept the US case was politically motivated.

But he said Assange may be able to argue that his likely treatment in the US prison system would breach his human rights and that could not receive a fair trial due to his notoriety and links to political scandals.