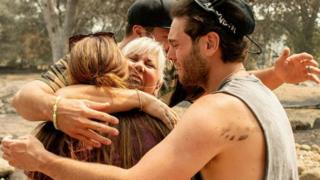 President Trump has sought to highlight forest management rather than climate change as the key factor explaining the wildfires burning across California, Oregon and Washington states.

When asked during a visit to California about the role of climate change, Mr Trump said: “I think this is more of a [forest]management situation.”

And he pointed to other nations with forests, saying: “You go to Austria, you go Finland, you go to many different countries they don’t have fires…”

So is poor forest management responsible for these worsening fires?

Who manages the forests?

Firstly, most forest in California, Oregon and Washington isn’t the responsibility of the state authorities – in fact, their share of forest land is small.

In California state, the federal government owns nearly 58% of the 33 million acres of forest, according to the state governor’s office. The state itself owns just three per cent, with the rest owned by private individuals or companies or Native American groups.

There’s a similar picture in Oregon, with significant proportions of forest land in federal rather than state hands, as well as under private ownership.

And in Washington state, only 12% of forest land is in the hands of the state authorities, with 43% federally-owned and 36% in private hands.

Federal agencies like the US Forest Service, the Bureau of Land Management and the National Parks Service are responsible for the upkeep of federally-owned land, and as far as private forest land is concerned, it’s up to the owners to manage these areas.

State and federal agencies have programmes and regulations to encourage co-operation and best practice when it comes to managing private forested areas, including reducing the threat of wildfires.

But there’ve also been funding cuts to federal agencies under President Trump, although the administration has given some more money for specific programmes to reduce the risk of wildfires.

Could there be better forest management?

Two years ago, President Trump also criticised California’s forest management. He pointed to Finland, where he said they raked and cleared the forests to prevent fires.

Finland is not directly comparable to California due to differences in climate, types of vegetation and land use.

But experts believe there are issues with forest management practice and land use across California and elsewhere.

Scott Stephens, a leading authority on wildfires, at the University of California, has for some years questioned forest management priorities.

He’s pointed to the large number of dead trees left standing in parts of the state, due to drought and disease, as a serious fire risk that needs to be addressed.

Prof Stefan Doerr, a wildfires expert at Swansea University, highlights the modern practice of total fire suppression, at the expense of allowing some limited fires to burn and create firebreaks.

“For centuries, Native American peoples would burn parts of the forest… and that would thin out more flammable vegetation and make forests less dense.

“But the emphasis has been on putting out any fires – and with climate change this has now created a tinderbox of vegetation,” says Prof Doerr.

The US Forest Service has been trying to rectify this in recent years through setting fires in what’s called “controlled” or “prescribed” burning.

However, there are questions about whether enough resources are being devoted to this, and if it’s really come too late in the day to prevent major fires.

John Bailey, a wildfire expert at Oregon State University, told the BBC that while prescribed burning has been carried out in the state, “it’s probably not enough to keep up with the amount of fuel accumulating on the landscape each year.”

The Governor of Washington State, Jay Inslee, has acknowledged that “there are places where it makes sense that we thin our timber. And we are doing that.”

But he also criticised President Trump for highlighting this factor, rather than climate change: “These are climate [change]fires.”

What’s the role of climate change?

Drier, warmer conditions lead to vegetation drying out and becoming more flammable. Add to that the fact that winter seasons when it rains or snows are getting shorter by the year.

In terms of loss of life and damage to property, the data shows the worst fires have all been in the past 10 years or so – except for one fire in 1991 in Alameda County.

And this year, there have also been unusually strong winds combined with periods of drought across parts of the western US. Six of the largest fires recorded in California have all happened this year.

Prof Doerr says a combination of drier, hotter and windy conditions is the key factor in these recent fires.

He adds that even in areas where there have been attempts to reduce flammable material in forests, it’s not clear how much difference this would have made.

“The bottom line remains that the extreme meteorological conditions are the main drivers for these extreme fires.”

What else is making these fires worse?

A key issue is the increasing number of people moving out of urban areas to live near forests, known as the wildland-urban interface.

One 2018 study for the Proceedings of the National Academy of Sciences in the US, estimated about one in three homes were now in such areas.

A report in 2015 for the US Department of Agriculture warned that the expansion of the wildland-urban interface “has increased the likelihood that wildfires will threaten structures and people.”

This article was originally published in November 2018. It has been extensively revised.

Send us your questions