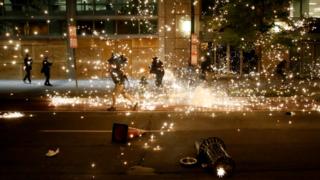 Protesters run as police use flash grenades to disperse crowds in Washington, DC

Violence has erupted in cities across the US on the sixth night of protests sparked by the death in police custody of African-American George Floyd.

Curfews have been imposed in nearly 40 cities, but people have largely ignored them, leading to tense stand-offs.

Police vehicles were set on fire and shops were looted in several cities.

The National Guard – the US reserve military force for domestic emergencies – said on Sunday that 5,000 of its personnel had been activated in 15 states and Washington, DC, where crowds once again gathered near the White House, this time lighting fires and throwing stones at riot officers.

It has emerged that in Friday night’s unrest, President Donald Trump was briefly taken by the secret service into an underground bunker at the White House, for his safety.

The US is witnessing the most widespread racial turbulence and civil unrest since the violent backlash to the assassination of Martin Luther King in 1968, says the BBC’s Nick Bryant.

More than 75 cities have seen protests, with streets only days ago deserted because of coronavirus, thronged with demonstrators marching shoulder to shoulder.

The Floyd case has reignited anger over police killings of black Americans. For many, the outrage also reflects years of frustration over socio-economic inequality and segregation, not least in Minneapolis itself, where George Floyd died.

What’s the latest on the protests?

There were many instances of police vehicles being vandalised and set alight on Sunday. Riot officers continued to respond with tear gas and flash grenades.

At least 4,400 people have been arrested over several days of protests, according to a tally compiled by the Associated Press news agency. Arrests have been made over a range of offences, from looting and blocking motorways to breaking curfew.

In Minneapolis, a lorry driver was arrested after reportedly breaching a road barrier before speeding towards a crowd of protesters marching along a major motorway. He has now been charged with assault, CNN reports.

Footage posted on social media showed dozens of people surrounding the vehicle and pulling the driver out from behind the wheel after it came to a stop.

The driver was later taken to hospital with minor injuries. There were no immediate reports of other casualties.

Minnesota’s Governor Tim Walz said the motive of the driver was unclear, adding: “To not have tragedy and many deaths is simply an amazing thing.”

In Denver, thousands of people protested peacefully in Colorado State Capitol by lying face down with their hands behind their backs and chanting: “I can’t breathe” – a reference to the circumstances of Mr Floyd’s death.

There were also several reported incidents of riot police responding disproportionately to the demonstrators. In Atlanta, Georgia, two officers were sacked on Sunday for using excessive force – including firing a taser – on two young college students.

A sacked white policeman has been charged with murdering Mr Floyd, 46, in Minneapolis.

Derek Chauvin, 44, was due to appear in court later on Monday, but his appearance has now been pushed back to 8 June.

It follows the high-profile cases of Michael Brown in Ferguson, Eric Garner in New York and others that have driven the Black Lives Matter movement.

For three years, Donald Trump presided over a nation of relative peace and prosperity. The crises he faced were largely of his own making, and he confronted them by rallying his supporters and condemning his opponents.

Now Trump faces a situation ill-suited to a playbook of division. The US economy has been hobbled by a deadly pandemic. George Floyd’s death at the hands of a Minneapolis police officer has spread racial unrest across the nation. The public is uncertain and afraid – and increasingly angry.

These are circumstances that would test the abilities of even the most skilful leaders. This president, however, risks becoming lost at sea. His public calls for unity and healing have been undermined by a penchant for Twitter name-calling and bellicosity. Message discipline, a valuable attribute at this moment, is not his forte.

There may be no easy way to guide the nation through its current peril. Barack Obama’s measured coolness did nothing to stop the fires of Ferguson any more than Richard Nixon’s law-and-order edicts quelled Vietnam-era unrest.

The economic and social devastation of the pandemic has created a political landscape of dry brush ignited by the lightning strike of Floyd’s death. The president may not be able to contain the wildfire, even if he isn’t feeding the flames.

Terrence Floyd, George’s younger brother, has been speaking to ABC News about his death; he condemns the violent protests and says his brother stood for peace.

“I’m outraged too,” he said. “Sometimes I get angry… I want to go crazy. My brother wasn’t about that. My brother was about peace. You’ll hear a lot of people saying: ‘He was a gentle giant…’

“I just had to come down here to speak to people, and let people know, just channel your anger elsewhere. Don’t tear up your town.”

What happened to George Floyd?

On the evening of Monday 25 May, police received a phone call from a neighbourhood grocery store alleging that George Floyd had paid with a counterfeit $20 note.

Officers were attempting to put him in a police vehicle when he dropped to the ground, telling them he was claustrophobic.

According to police, he physically resisted officers and was handcuffed. Video of the incident does not show how the confrontation started.

With Mr Chauvin’s knee on his neck, Mr Floyd can be heard saying “please, I can’t breathe” and “don’t kill me”.

According to a preliminary autopsy by the county medical examiner, the police officer had his knee on Mr Floyd’s neck for eight minutes and 46 seconds – almost three minutes of which was after Mr Floyd became non-responsive.

Nearly two minutes before Mr Chauvin removed his knee the other officers checked Mr Floyd’s right wrist for a pulse and were unable to find one. He was taken to hospital and pronounced dead around an hour later.

A lawyer for Mr Floyd’s family has accused Mr Chauvin of “premeditated murder”.

Do you have any information about the protests? Share your experiences by emailing haveyoursay@bbc.co.uk.

Please include a contact number if you are willing to speak to a BBC journalist.