While nostalgia in entertainment is nothing new, the indie music scene has been witnessing a particularly large wave of it recently with a number of bands adopting an audio aesthetic heavily reminiscent of the 70s/80s and even earlier. Here we explore why, and where the trend is headed.

Nostalgia is a powerful thing and has shaped our entertainment consumption for decades. In cinema, nostalgia seemed to peak in the 1980s, from Stand By Me to Back to the Future to Raging Bull. Musically, however, that nostalgic feeling seems to be most prominent right now. In indie music in particular – whether that be indie rock or indie pop – a slew of bands seem to be imitating sounds from the 70s and 80s (and sometimes even earlier).

From big-name artists, like Paramore or Greta Van Fleet, to a variety of homegrown bedroom artists making synthwave and classic rock, it’s undeniable that the vintage sound is highly sought after. To meet demand, music studios are giving a new generation of artists the equipment needed to produce a definitively retro sound. Just take London’s Kore Studios with their analogue Tweed Audio console or NYC’s Pyramind Recording Studio and their selection of vintage equipment. So, why is this sound becoming so popular?

The growth of the vintage sound

From the psychedelic fuzz of King Gizzard & The Lizard Wizard to the synth-filled indie-pop bangers on Paramore’s Hard Times to the genuine 70s vibe we get from Michigan-based ‘love-them-or-hate-them’ band Greta Van Fleet, vintage comes in so many varieties. Even mainstream pop music isn’t afraid of dipping its toes into the world of vintage. Whether on Taylor Swift’s self-explanatory 1989 or through pretty much any Mark Ronson produced track starting with his work with Amy Winehouse, it seems that everyone wants to produce a real sentimental sound.

Musicians have always looked back when making music, but the growth of the vintage indie sound recently seems to be much more blatant. Perhaps it’s because musicians back in the day would never want to come across as being too influenced by previous music – after all, being called ‘derivative’ was just about the worst insult you could receive. We have a few theories as to why these changes have occurred.

Any young music fan who was brought up on their parents’ and grandparents’ record collection will have experienced an “I was born in the wrong generation” moment. Perhaps it occurred on a long road trip while listening to Hotel California, maybe it was thanks to your aunt singing along to Like A Prayer – whatever the case, if you’re a music-loving millennial, it probably happened.

Even outside of music, the success of shows like Stranger Things and Riverdale, the latter being set in a combination of the 50s and the present day, go to show how audiences are craving retro media. From Daft Punk’s Get Lucky to Bruno Mars’ Uptown Funk some of the past decade’s biggest selling hits all stem from that same retro love.

It’s easy to do 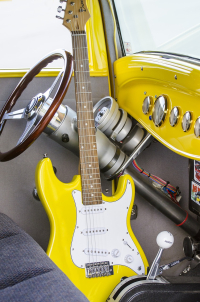 Popular music artists have always been inspired by the past, but often simply haven’t had the ability to replicate the music they were most inspired by. Whether in professional studios or at home, the availability of vintage audio equipment – or software that can imitate it – is a fairly recent development.

Want that classic 60s psychedelic fuzz for your guitar? There’s a pedal for that. How about getting the kind of classic vocal sound only achievable through an expensive vintage ribbon mic? There’s no need to struggle, just open up GarageBand on your MacBook and find the effect you’re looking for. On top of the avenues modern tech opens to replicate the sounds of the past, websites like eBay and Craigslist make finding vintage equipment easier than ever.

A new way of rebelling

Vintage may find its way into popular music every now and then, but it’s in the alternative and indie scenes where it’s most prevalent. The reason for this, as with most indie music, boils down to rebellion. Rather than the dulcet tones of the over-produced pop sensations that fill the airwaves, creating a vintage sounding piece of indie music gives artists a way to really stand out from modern pop music.

Taking inspiration from vintage stylings has allowed bands like Slaves and Idles to breathe new life into the indie punk scene. Lifting the motorik beats associated with the Krautrock and post-punk of the 60s and 70s has given bands like these a distinctly vintage feel, while their modern lyrical themes define them as an explicitly contemporary band at the same time.

What next for vintage?

It’s undeniable that the vintage sound has been growing almost exponentially in the vintage and alternative scenes over the past few years for a multitude of reasons. As far as we can tell, it won’t be going away either. Retro themes and vintage audio features are fast becoming a staple of indie music and that’s no bad thing.

Rather than living in the past, the best indie bands right now are fusing indie vibes with distinctly modern themes to bolster the genre with the sounds of the past. It’s important to remember that even though they may have musical elements that were popular decades ago, these bands are also doing something entirely different.